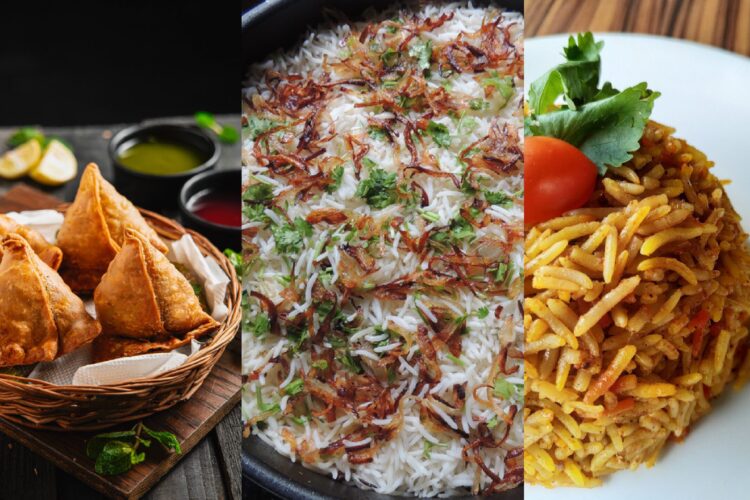 One of the many advantages of living in India is the absolute variety of consumables that arise from every little state of the country. For example, if Kerala has Chettinad chicken, Punjab has butter chicken, and both are equally scrumptious. While the world is out there figuring out ways to reduce the calorific value of food, India’s invented a lot of healthy food recipes. Here are some dishes that Europeans love that originated from India.

Butter chicken is a Punjabi dish that has a gravy base with a plethora of spices. This curry often involves tomato puree, onions, butter and cream, all blended into a smooth silken texture.

The chicken is usually luscious and spicy to eat, hence gaining fame everywhere. Some people eat it as is; some people eat it with bread like roti or naan. It’s definitely a food that captures the essence of Indian cooking to its maximum potential and is best served when hot.

Biryani is one of the most classic rice dishes from India. It’s the first thing that pops into your head when you think about dishes made from rice. It contains meat or veggies, marinated with curd and cooked slowly with rice for hours.

It’s a slow process, and it takes time to make genuine biryani (not this ready-to-eat foodstuff that’s available in the market nowadays), and the rice used to make it is also fragrant.

It’s no wonder that people love such a delicacy that’s also good food for health. This makes it one of the best complete foods from Indian cuisine.

Samosa is one dish that makes you want to believe that fast food is good for health. It is a dough pocket filled with mashed potatoes, peas, various condiments and spices. This pocket is then deep-fried till it is golden-brown in color.

It’s a dish that leaves the mouth-watering and the taste buds yearning for more. It’s best served when hot.

Dosa is one of the most iconic south Indian dishes, along with Vada and idli. It’s best served along with sambar, coconut chutney and more often than not, tomato chutney. You can also zing it up and add masala to it, which includes onions, mashed potatoes, peas and spices.

To sum it up in two words, it’s like the Indian pancake. It has a slight sour off-taste because it is made out of fermented rice paste. It is a daily food for good health in many parts of the country.

It’s a very famous sweetmeat that hails from India. You wish it would be a fast food good for health because it is just so tasty. It is made out of khoa, which is wrapped in dough made out of refined flour and fried in oil. The fried balls are then dipped into sugar syrup and served hot or cold.

This is a dessert that once you eat, you won’t be able to stop. So it won’t come as a surprise that it is famous all across the globe.

No curry can be eaten without bread, and the most famous bread that hail from India are roti and naan. Naan, the better half of the two (it’s more pricey everywhere you go), is a soft flatbread that’s baked in the clay oven.

Although there are many variants of naan present all over India, like garlic naan, the best one is definitely butter naan (maybe this opinion is biased). It tastes good with all curries; it is bound to make your mouth water.

Strips of chicken marinated in yogurt and cooked in clay ovens called tandoor make your mouth water, don’t they? Its heavenly taste can be enjoyed in itself, or it can be eaten with naan or roti.

People often add more condiments to improve the existing taste, like chili peppers and lemons. It can be had with wine, as appetizers or as the main course, so it won’t be inappropriate to call it the perfect chicken dish.

Kebabs are a specialty that originated in the Middle East, but it found its way to India and has been evolving ever since. Basically, it involves minced and ground meat or vegetables-infused with spices and roasted slowly over a charcoal spit.

It cooks slowly, but the aroma it gives off is definitely nothing to make short of. It is a favorite in Britain, and rightfully so.

This is a very simple food, curd mixed with various vegetables and spices. Although there are other variants like boondi raita, and some variants are made off of one vegetable, like bathue ka raita the classic vegetable raita is most famous. It is often served with quite a few rice dishes, and it especially pairs well with biryani.

It is a food good for oral health, as it improves the metabolism in your body (due to all the curd and veggies). It cools down your body and has many more beneficial effects.

Papad is another very simple dish. To be more precise, it’s a side dish or sometimes even a pre-appetizer. Whenever you visit a good Indian restaurant, you’ll be greeted by these cracker-like pre-appetizers, which you can relish with the coriander chutney they provide you.

In South Indian restaurants, it is often served whole as a side dish along with rice and sambar, which pairs really well as a dish. Its slight salty taste is often enhanced by adding a few spices, making it a masala papad, which is an appetizer in a class of its own.

Dishes served in India cover a wide variety of taste buds; hence, they need to be tailored to various tastes. We’re blessed with a plethora of spices and vegetables, and they’re put to good use every day. A lot of good Indian foods are a part of the daily food chart for good health, and it never hurts to follow one.

So, if you’re a food enthusiast and have never tried Indian food, you should definitely try it!