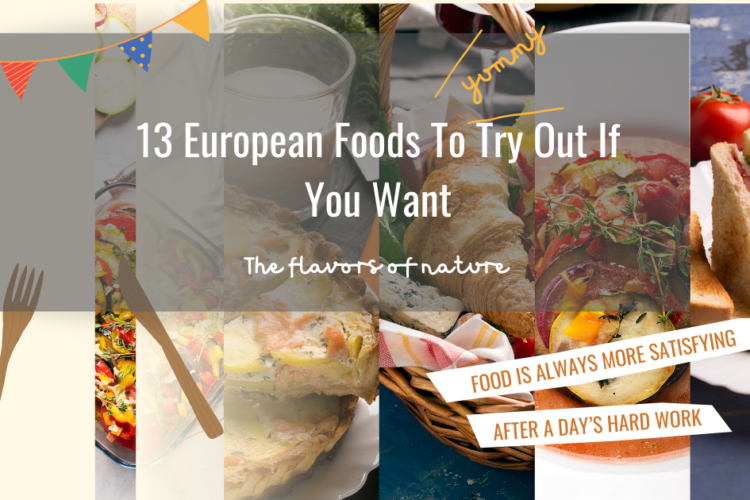 Food is the essence of a person; without its presence, not only would our lives be dull, but we would also just not survive. However, along with the evolution of humans, some food also evolved to be a luxury rather than a necessity.

The way how food changed taste and texture depended on the vibes they were cooked in. Here are some food items that were cooked in the fervent flames of Europe, the best european foods.

This object of heaven hails from France, and it proves wisdom isn’t the only thing that gets better as it ages. There are so many varieties of this delicacy, ranging from Brie, Camembert to Bleu d’Auvergne (Blue cheese).

If you ever get a chance to try these articles, definitely go for them. They go with almost everything: wine, bread and are even good enough to eat as they are!

Chocolate is life. Ever since we were kids, we have been drawn towards the sweetness that’s chocolates. Belgian chocolates are a level above that, rich and creamy with a silken texture none can match.

Enriched with dark chocolate, fruits and nuts or caramel, you really can’t go wrong with the taste of these sweets. They’re bound to please your sweet tooth; you can grab them in any European food store.

It might sound a bit unappetizing, but it’s one of the tastiest fish dishes out there. Dutch herring is a delicacy where the fish is served raw, with pickles and other fine ingredients.

It’s a very common dish in the Netherlands, liked by the rich and poor alike. There’s even a peculiar way to eat it, the fish is held by the tail, and it is eaten whole from the head!

The name of the food is a misnomer; although it sounds like a rabbit dish, it’s got nothing to do with rabbits. In fact, it doesn’t have any form of meat; it’s just bread and cheese.

It traces its origins from the late 18th century and hence has such a weird name. In reality, it’s toasted bread with molten cheese, a delicacy that’s waiting to be tried.

Gyros are bound to take you out for a whirl. This food that hails from Greece is loaded with ingredients: Chicken or pork, tomatoes, onions, tzatziki and sometimes even fries, wrapped in a flatbread.

It’s chock full of flavors and a sight that cannot disappoint you. It’s truly one of the best eastern European food. What’s even better, you can munch on it while gazing at the Parthenon!

Escargot in French literally translates to snails. Snails are an essential part of the French diet and a recipe sullied by no other cultures. They are often served with garlic essence and are considered to be one of the greatest delicacies.

You might feel that snails are unappealing, but connoisseurs might tell you otherwise. They have a chicken-like texture and are served with or without the shell. Try it out once and see the flavors explode in your mouth.

Scones are a famous sweet treat from England that has found variants all over the world. It’s freshly baked dough with jam or cream on top. It’s a very traditional European cuisine.

Scones are often had with tea; it’s a delight to eat. A bite of a scone and a sip of Earl Grey tea is bound to bring joy to anyone regardless of whether they’ve been to England or not.

These are sweets that you almost don’t want to eat. Don’t get the wrong idea; they’re one of the most delicious sweet treats out there, but they’re just so pretty. They have a meringue base and are like cookies.

They’re filled with ganache, buttercream or jam, and if you bite into one, it’s impossible to stop yourself. Macarons are the king of sweets in the European food market.

Fish and chips (From England)

It was traditionally eaten in the port towns of England, but eventually, it gained a lot of popularity throughout the world. It’s a really simple dish; it has a piece of cod or haddock, along with fries (called chips in England, thank you for making this easy for us).

The fish is fried and covered in spices, and this is usually served with mayonnaise and mint sauce. Although it might seem like a simple recipe, a mere whiff of it is bound to make your mouth water!

This is a sweet from Portugal (and the first entry from there) and is in a league of its own. It’s a form of custard tarts, which means it has a crust with custard on the inside.

This sweet will leave you asking for more, with the texture, the flavor and the aroma just perfect.

There’s not much to be said with this pizza. Authentic foods are very rare to find (you have to go there to eat them), and Naples pizza is one such object.

Margherita pizza was invented here, so every intricacy of this delicacy is bound to be a mouthful.

It is a British dessert bound to make you drool and please your sweet tooth. It is, as it sounds, a sponge cake covered with toffee syrup. It’s often served with a side of vanilla, cream or ice cream.

Toffee pudding is very sweet, so even if you love it, don’t eat it too much. (You want to eat more of it later)

It’s considered one of the best desserts around the world, and that’s why it was saved for last. Zit has a glazed caramel top with a smooth texture that just melts in your mouth.

Try it out once, and you’ll know why it is called one of the best treats in the world!