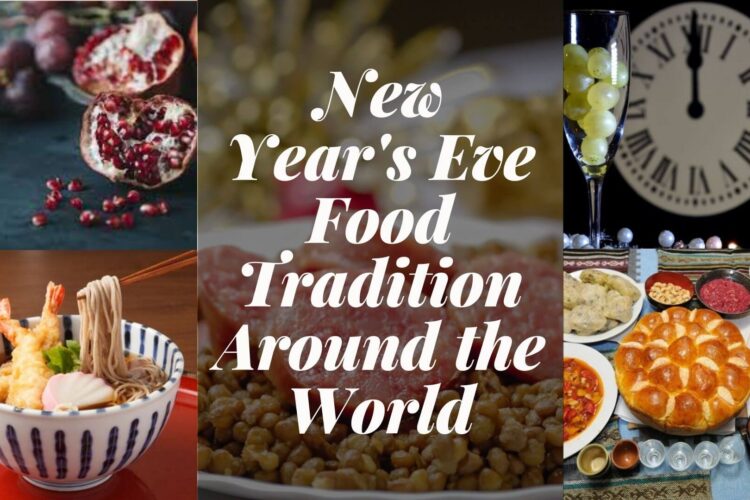 Here’s a roundup of some of the finest customs linked with the last night of the year, from large feasts to eating grapes when the clock strikes midnight.

With its reflection on the past and the promise of a new beginning – a whole new year – the next day, New Year’s Eve has a certain allure.

It’s little surprise that the event is usually marked by enthusiastic, if not loud, festivities. Although a midnight champagne toast is a tradition in the United States, festivities around the world varies.

And, very often, these gatherings focus on new year food tradition, which can represent a variety of emotions. Here’s how some diverse civilizations throughout the world ring in the New Year (and we’re not even talking about New Year traditions, so save those black-eyed peas for your hangover).

When the clock strikes midnight on New Year’s Eve – New Year’s Eve – Spaniards know how to party, but many will take a pause from the festivities to eat 12 grapes. Yes, 12 to be exact – one for each midnight strike (in the US we see the ball drop in Times Square, but in Spain, a historic bell tower is broadcast in Madrid).

It is said that individuals who complete their grape bite before the last stroke of the bell will have good fortune for the next 12 months. There must be something to it because it has been a tradition since the 1880s. Other Spanish-speaking countries around the world have adopted the practice.

On New Year’s Eve, Brazilians have a slightly unusual tradition of eating grapes, along with a few other things. Everything is done in lucky sevens: it is customary to jump in seven waves at midnight, making seven wishes.

Pomegranates play a role in New Year’s festivities in Turkey as well, although in a totally different way. As the clock strikes midnight, don’t be shocked if you find someone crushing a pomegranate on your doorstep.

They aren’t insane; they simply believe that distributing the jewel-like pomegranate seeds will bring them good fortune in the coming year. Some people choose to slice open a pomegranate at midnight, while others in Turkey prefer to throw salt on their front door in the same hope.

A steaming bowl of toshikoshi soba (year-old noodles or New Year’s noodles) is served there as a 13th-century tradition to assist you to bid goodbye to the previous year and welcome the new one.

Slurping soba noodles is thought to bring a fulfilled life, and the buckwheat noodles are also connected with strength and resilience. Another Japanese new year tradition is mochitsuki, which involves pounding sweet, sticky rice into mochi on New Year’s Eve. However, be cautious: the chewy treats can cause choking.

On New Year’s Eve, a Bulgarian table is likely to be laden with new year food tradition. Traditionally, a large, festive Christmas meal is served with heavy main courses such as pork with cabbage or roast turkey.

However, banitsa, a type of borek (cheese-filled pastry) that is usually only made on Christmas and New Year’s Eve, is one of the most popular holiday culinary traditions.

The egg and cheese are wrapped in phyllo dough and cooked in a tight circle. Charms, symbolic objects (such as a miniature dogwood branch with a blossom for health), coins, and written wishes wrapped firmly in tinfoil are buried in the banitsa so that a portion of it (which is sometimes determined by spinning the banitsa on the table) is like fortune telling.

Georgians (the country, not the US state) prepare and eat gozinaki as a sweet start to the New Year ( caramelised walnuts cooked in honey). Only on New Year’s Eve and Christmas are these delicacies, which are a cross between nougat and nut brittle, served. At midnight, gozinaki is customarily cut into lozenge shapes and consumed. Just keep an eye on your teeth; these are serious filling yankers!

It’s no wonder that Italians throw a spectacular feast because Italy is all about new year food tradition. New Year’s Eve feast – to ring in the New Year, or New Year. Lentils are frequently used to symbolise good luck and prosperity in the New Year, though the menu differs by family and location. Pork, which is connected with abundance, is frequently served as stuffed pig’s feet or sausages. A popular dessert is fried dough balls with honey and confectioners’ powdered sugar (chatter).

Lentils are generally connected with prosperity due to their likeness to coins, and are hence a favourite New Year’s Eve snack in various nations, including Nigeria. Also popular is a seafood stew. In Nigeria, don’t eat fowl on New Year’s Eve since superstition claims that it will make you poor in the coming year.

On New Year’s Eve in Amsterdam, you’re likely to come across doughnut stalls, which are street carts offering hot fried dough known as deep-fried donut balls (which translates directly into fried oil balls). This is a New Year’s Eve specialty, and the dough is sometimes studded with currants and sultanas to make it even more festive. When the donuts emerge from the oil, they are instantly smothered in icing sugar for a tasty treat.