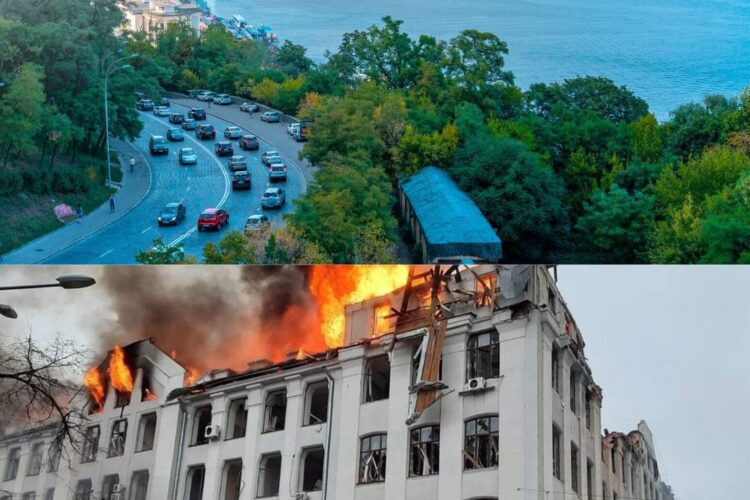 Ukraine is one of the most beautiful countries in the world. It has naturally-gifted spectacular landscapes, charming culture, sweet people and amazing traditions.

The country has successfully caught the eyes of several people across the world. Throughout the year, a massive number of people visit the place to experience serene blissfulness.

According to different reports, it is claimed that a minimum of a million tourists visit this country every year. It’s listed as one of the most beautiful countries in Europe.

Unfortunately, the current war between the country and Russia has led to the destruction of several tourist destinations in Ukraine. While the people are struggling to save their lives, the places are also suffering a great loss.

In fact, some of the top attractions in Ukraine are almost dead to ashes as per some news articles. Below is a complete list of places under destruction right now as well as the places that have been already demolished.

The capital city of Ukraine, Kyiv is popular for many reasons at once. It is also said to be the most famous city of the country. It is not only full of various cultural centres but also of many scientific centres.

Additionally, it has always been an important city due to its industrial and educational factors. This includes a huge number of high technology industries and quality educational institutions. Wide public transportation and infrastructure also adds to the great convenience present in the city.

But due to the current war, the city is facing a lot of devastation. Explosions and bombings are becoming common nowadays. Chaos and mayhem is huge at almost every public place, especially train stations. The beautiful Ukraine city is now under heavy ruins and disruption.

Some of the most interesting Ukraine tourist spots are present in Chernobyl today. Visitors and travellers always have this place in their bucket lists

while visiting this country. A major reason behind this is the incident of a captivating nuclear accident of the power plant. It has interested not only the common travellers but researchers, investigators and even usual students to visit the place due to its intriguing factor.

Chernobyl has already seen a lot of turmoil before and the place is under commotion once again. The city, just like any other place in Ukraine right now, is dealing with a lot of clashes.

Lviv is also one of the most popular cities in Ukraine. Some of the best Ukraine tourist spots fall under this city. Visitors love visiting all the architectural places here as they are highly pretty.

They also reflect upon the historical heritage of the town. But recently, numerous news articles stated how Russian missiles have hit the place terrifically. It has been seen that a lot of people have already started losing hope in the city although the other half is also trying to remain hopeful.

This historical region has a wide range of places to visit. Some of Ukraine’s best tourist places are present here. Unlike other places, this place is not a city but a village instead. An interesting fact about this village is that it is submerged in a way. Apart from that, it has a lot of rocky and stony locations. There are several caves to visit here.

Unfortunately, this place is under destruction as well. Bombings and other attacks are destroying the natural blissfulness of the village.

Just like other places on this list, this city also has some of Ukraine’s top tourist attractions. You will come across different kinds of places here out of which many will be extremely unique. Due to its tremendously cultural past, it has some of the prettiest places in the country.

Any visitor here would definitely add Chernihiv as one of the first Ukraine tourist places to visit. But the Russia-Ukraine war has destroyed many places here as well. It’s heartbreaking to witness so much destruction and deal with the loss of highly beautiful Ukraine’s tourist attractions. Peace and patience are all that the people want and hope for right now.